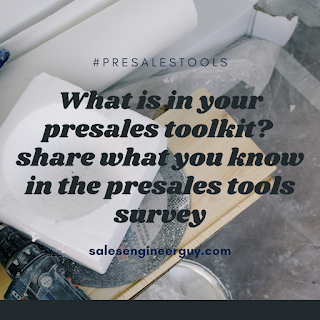 There's a presales tech stack emerging and just being built, from hardware such as headsets, cameras and presentation tools (whiteboards), to software such as demo tooling, demo building, presentation software and more.

We covered a few things such as demo-ing over the air, how to set your scene using a camera, tech you should get such as lightrings, webcams, microphones and other useful tech, but overall tech doesnt make you a better demoer, proper practice and skill does.

"Having all the tech won't make you a better demoer" or "A bad demo will always be a bad demo regardless of tech.

PreSales is now at the table with a firm grip on a seat there, the tech stack is being built in flight and we as professionals have the power to guide vendors to make better technology.

OBS was a big player, maybe some guides on this/more content in the future would be useful here.

Zoom annotations was a standout point, being able to annotate on the top of a screenshare is really useful and engaging.

Vivun is being used and is considered decent by a few members. 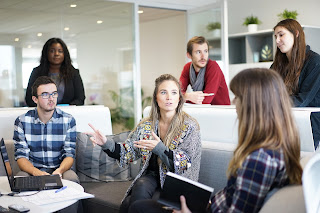 Many presales professionals develop very strong in person skills on presenting, listening and handling objections. Often people ask me why should they bother having a strong linkedin profile or other social media sites? This is an interesting question, as having a good profile could help you start your face to face meetings with a stronger first impression. Your customers and prospects will do their research on you before meeting you. They want to know why you are coming, or hear from you in between sessions.  If you like this topic - please join our PresalesTalks session this week -  https://www.clubhouse.com/event/xqk3qWd9 A strong profile is part of a complete communication profile and could help you sell more by doing less work individually with customers. You may also have a stronger impression on others in your network and find new opportunities more easily.  Here's my top tips on what makes a good presales social media profile: 1. How to make a good first impression ? Your 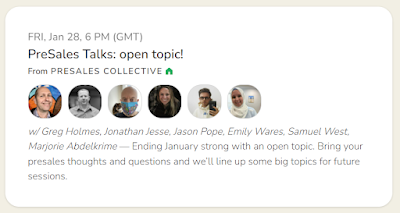 We had a good talk last week on PresalesTalks about social media, personal & professional accounts, and how to get started in a new role using social media. Join us again next week for more presales talks 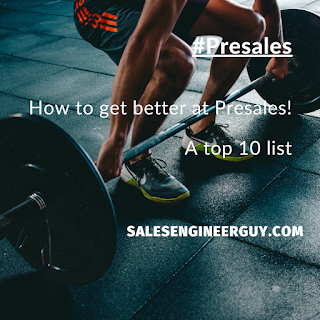 10 tips for the New Year at Improving in Presales

Getting into the new year, these are my top 10 things to improve at for presales! No matter how good you are today, you should be able to find ways to improve and get better. Here are some of mine! Practice your demos! Do dry runs, recordings and listen to yourself Write out scripts on what you plan to do in a session. Be flexible, but go in with a plan. After you say anything, think as if the customer is saying "so what" and make sure you have a reason Make sure everything you said is understandable by a beginner in your field. Cut out jargon, acronyms and slang that might be hard for someone to understand Do your demos from the customer point of view - think about your audience Listen more. If the customer is taking time to say something, give them that time, and listen carefully to everything they say. Introductions are important, try to understand why everyone has come to this meeting and what they want Prioritize your time - and do the most important stuff first! Try to